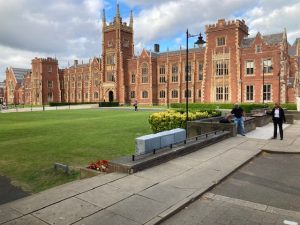 Over four hot and sunny days, the British Legal History Conference, in association with the Irish Legal History Society, enjoyed the hospitality of the Queen’s University and City of Belfast. The theme of the conference was “Law and Constitutional Change”, perhaps not inappropriate given the Republic of Ireland’s Decade of Anniversaries, and current fast-changing debates and politics in the United Kingdom: indeed it briefly looked as if a constitutional crisis might loom in the U.K. on one of the days of the conference.

The decision had been made to postpone the conference, original scheduled for 2021, to 2022, due to Covid. This was wise. We are all now familiar with the way large conferences do not work well on line, and with the technical complexities, failures, and psychological oddities caused by attempts at hybrid conferences. The postponement had the happy result that this was the fiftieth anniversary of the first conference, held at Aberystwyth in 1972.

It was a busy conference; not everyone was ultimately able to make it because of the issue of covid and problems with air travel, but well over 150 people were there. My impression was that, though there were members from continental Europe, Australia, and North America, there were not as many from those regions as normal; but this was just an impression, and may be wrong. The size of the Conference meant that some of the five sessions had four or three separate panels, with each panel having three to four presentations. Thus, a wealth of research was on display, testifying, above all, to the liveliness of legal history in Britain and Ireland. It is impossible to discuss individual papers, other than those I personally attended, so I shall forbear. But there were no fewer than six excellent plenary sessions. At one Lady Hale reflected on the Human Rights Act; at another Sir John Baker discussed “The Origins of Judicial Review”, while later Professor Ian McBride of Oxford discussed “Irish Catholics and the Plenary Laws”; Professor Lauren Benton (Yale) gave a presentation on “Law and Armed Peace in the British Empire”. The sixth plenary was a panel discussion at the end of the conference. I shall single out the fascinating fourth plenary presentation by Dr Timothy Murtagh because of its wide implications. His title was “Beyond 2022”. As well known to all historical scholars, on 30 June 1922, as the Irish Civil War opened, the Public Record office of Ireland was destroyed. The project “Beyond 2022” is a virtual, digital recreation of the Office and its contents, drawn together from copies archived elsewhere. This was fascinating, and gives an indication of what can be done.

The evening of the opening day of the Conference included a visit to the very grand City Hall of Belfast for a reception generously sponsored by the Journal of Legal History and various legal professional bodies. On the next evening there was a trip to see the spectacular parliament buildings at Stormont, with a generous buffet and reception sponsored by Carson McDowell, solicitors in Belfast. As well as wandering round the grand 1920s and 1930s classical building, there was a fascinating talk by Professor Margaret O’Callaghan, essentially another, if short, plenary presentation. Her topic was “January to June 1922: James Craig and the Consolidation of Partition”. It was an interesting reflection on the tensions and drama in the north in this period.

The final full day of the conference closed with a reception in the “Old Library” now a graduate student centre, followed by dinner in the Great Hall. If I can be permitted a personal note, the “Old Library” was for a while the Special Collections section of the Queen’s University Library. It was there that I first held a book once owned by Adam Smith, as Queen’s University holds a substantial portion of his library (the other parts are in Tokyo and Edinburgh).

The conference was magnificently organized, and the main credit must go to Professor Emeritus Norma Dawson of QUB; but, as she would admit, this was a collaborative affair and credit must also go to various others, including Dr David Capper, Dr Conor McCormick, Dr Niamh Howlin, and Mr John Gordon, who also served when necessary as an enthusiastic M.C. One of the main drivers in bringing the BLHC to Belfast had been the late Sir Anthony (always known as Tony) Hart, who died in 2019. See https://www.elhblog.law.ed.ac.uk/2021/09/22/sir-anthony-hart-memorial-lecture-in-legal-history/ He was very much in the minds of those at the Conference and he was suitably remembered and commemorated. Lady Hart was present and graciously presented awards for the best papers given by research students. In the face of tough competition, that judged the best was by Ashley Hannay, who is taking up a post at Manchester having completed a thesis at Cambridge; but your blogger is proud to claim he supervised Ashley’s LLM dissertation on conciliar courts in Edinburgh a few years ago.

Finally, the city itself was rather a star. With its magnificent setting at the head of the Lough, surrounded by hills, and with its grand buildings it looked wonderful in the July sunshine. Around the University, in what’s now known as the University Quarter, are beautiful brick terraces of Victorian houses in Georgian survival style, many trees, and the Botanic Gardens. It created a relaxed and beautiful setting.

The photos below are mainly courtesy of Professor Mark Godfrey of Glasgow and with some by me. 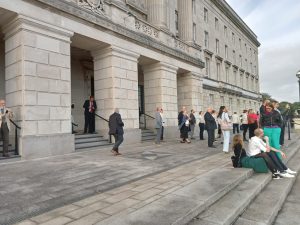 Around Queen’s University & Some Conference Goers 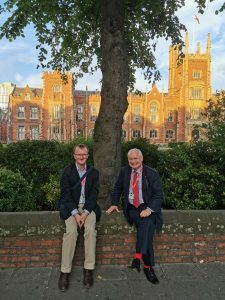 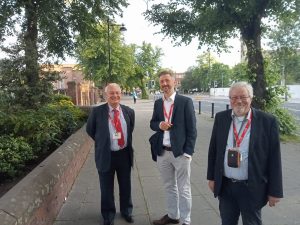 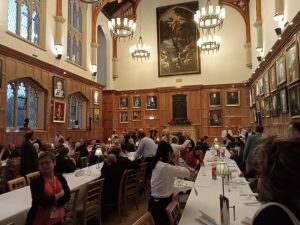