As a Scottish historian (if he may so describe himself), your blogger was very surprised to learn the extent to which the white rose is apparently by many understood to be a potent symbol of Scotland. Of course, nations attract many symbols, and simplistic political and nationalist messages seem to attract them in very large numbers. But this issue has now attracted the attention of many newspapers and bloggers since, as a gesture (to what?) the SNP members at Westminster, old and new, all wore a white rose for Her Majesty’s Speech at the State Opening of Parliament.

It is apparently all to do with Hugh MacDiarmid (C. M. Grieve), the curmudgeonly Marxist and nationalist poet, who wrote a poem favouring the white rose of Scotland over other roses. It is inscribed on the wall of (alas, sometimes rather twee) inscriptions on the side of the building of the current Scottish Parliament:

The rose of all the world is not for me
I want for my part
Only the little white rose of Scotland
That smells sharp and sweet – and breaks the heart.

The poem is a small gem. It was first published anonymously in The Modern Scot in July 1931. In 1976, Maurice Lindsay attributed it to Compton Mackenzie in Modern Scottish Poetry. MacDiarmid insisted it was his. There is a whole file of correspondence about this in the National Library of Scotland (Acc. 7807/2). (See also Sassi, Why Scottish Literature Matters, p. 17 note 9.)

A white rose is a potent symbol, of course, and one found elsewhere and used by other groups. One thinks of those who resisted Hitler in Munich. In British (as distinct from English) history, the white rose as a symbol is most obviously associated with Jacobitism: for example, it is often found on commemorative Jacobite glasses and in Jacobite portraits. The white cockades worn by Jacobite soldiers were rose symbols. It is sometimes thought that this is because James VII and II was born Duke of York (the symbol of York being, of course, the white rose), although white rose day in the Jacobite Calendar was the birthday of the Old Pretender, James’s son. Your blogger passes no opinion on this. It may explain, however, why Lindsay had initially attributed the poem to Compton Mackenzie – in many ways a much more attractive nationalist figure than Grieve – who cultivated a keen Jacobitism. With his hymn to Lenin, and liking for extremes (that often could not meet), Grieve was indeed more Jacobin than Jacobite.

When challenged, the SNP denied they were wearing a Jacobite symbol, but one drawn from MacDiarmid’s poem. It is a relief to know that the Honorable Members were not making a gesture to challenge the current monarch’s right to the throne in favour of the current Stewart legitimist claimant, the Head of the House of Wittelsbach, Franz, Duke of Bavaria! It is worth noting, however, that Murray Pittock, in The Invention of Scotland: The Stuart Myth and the Scottish Identity: 1638 to the Present, thinks MacDiarmid is indeed consciously referring to the rose as a Jacobite symbol. This is possible, of course, and poetry is complex and multi-layered, not necessarily subject to rational analysis, and without any deducible “correct” meaning.

Why I think the white rose mentioned by MacDiarmid cannot be the Jacobite rose, or at least not simply the Jacobite rose, is because it raises very interesting intertextual issues. As many have pointed out, MacDiarmid is making a conscious reference to a poem by W.B. Yeats, ‘The Rose of Battle”, which contains the line: “Rose of all Roses, Rose of all the World”. Yeats also wrote poems entitled “The Rose of the World” and the “The Rose of Peace”. For Yeats, the rose was a mystical, complex symbol, linked to love. One suspects MacDiarmid is referring to the first poem, and could arguably be seen as arguing a narrow, national particularism understanding of the rose, as the SNP seem to think, over Yeats’ love, universal cosmopolitanism and transcendentalism.

Of course, what makes this even more interesting is that MacDiarmid’s most famous poem is justly the rather brilliant “A Drunk Man Looks at the Thistle”, written in his synthetic Scots or “Lallans”. A lawyer must like a poem that contains the word “avizandum”! But, of course, thistle and rose are traditionally opposed or linked: one a symbol of Scotland, the other of England. William Dunbar’s famous poem on the marriage of Margaret Tudor to James IV is the entitled “The Thrissil and the Rois”. Indeed, MacDiarmid plays on these oppositions in his major poem. But yet MacDiarmid talks of the “Rose of Scotland” in “The Little White Rose”, instead of the usual rose of England. This must be deliberate. What are we to make of this appropriation for Scotland of the common symbol for England that also alludes to an Irish, Yeatsian occult mysticism? Is Pittock right? Is MacDiarmid making a Jacobite reference, understanding Jacobitism as a means of representing Scotland?

Or should we see MacDiarmid’s rose as a symbol of the British Isles – or even of its working classes – consider his addition to his long poem of a section on the General Strike on the “Crucified Red Rose” (presumably an allusion to Burns as well)? English, Scottish, and Irish all at once? Perhaps that is too much. But it is difficult to see it as a uniquely Scottish symbol, in the way the thistle undoubtedly is. Your blogger has an elegant Georgian hob grate in his home. It commemorates the Union of Great Britain with Ireland in 1801 – the Union for which so many Union Streets are named in Scotland. On its rear side panels, your blogger’s grate bears the image of one plant from which grows the shamrock, the thistle, and the rose, the traditional national flowers of the then newly United Kingdom. One should always recall the 1817 play by the Irish writer, best known as a novelist, Maria Edgeworth, “The Rose, Thistle and Shamrock”, a play that can be given a feminist and nationalist (within a United Kingdom) reading. But then, to paraphrase a famous quotation from the great historian Lewis Namier, nationalists “imagine the past and remember the future”, or less elegantly, fake a past to fake a future. One should perhaps end with Gertrude Stein: “A rose is a rose is a rose”.

The relevant part of your blogger’s Unionist grate: 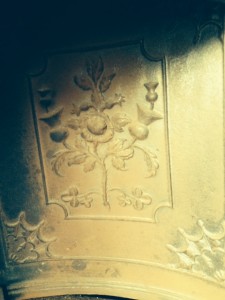