Your Blogger has long been interested in Archibald Campbell, third Duke of Argyll, and indeed in his writings has touched more than once on Argyll's influence on appointments to law chairs in Scotland. Roger Emerson, Professor Emeritus at the University of Western Ontario, and a pre-eminent intellectual historian of eighteenth-century Scotland, has just published a splendid new biography of the Duke: An Enlightened Duke: The Life of Archibald Campbell (1682-1761), Earl of Ilay, 3rd Duke of Argyll. Kilkerran: humming earth, 2013. ISBN 978 1 84622 039 5 (PBK); ISBN 978 1 84622 040 1 (HBK). That there has been no earlier book-length assessment of the man would in itself mean that this was an important publication; but Emerson has produced a thoroughly researched and well-written book. The work makes a convincing case for the Duke as having a central role in promoting the Scottish Enlightenment, and, indeed, as a major Scottish figure of the eighteenth century. The Duke was an able and wily politician; but he was also a significant scientist, intellectual, book collector, improving landlord, with patriotic aims of improvement of his native land. He was so much more than just a politician aligned with Walpole.
Given Emerson's interests, Argyll's role in intellectual life is a major theme. Given that this is a legal history blog, it is important to note that there is an excellent chapter on Argyll and Scots law (the Duke had studied Roman law in Utrecht); Argyll liked to exercise his right to sit on the bench of the Court of Session in Edinburgh, and was also Lord Justice General. Indeed Allan Ramsay produced a splendid portrait of him wearing his judicial robes. Throughout the book there is much to interest legal historians.

The cover, reproduced below, shows him wearing his robes as Earl of Ilay. 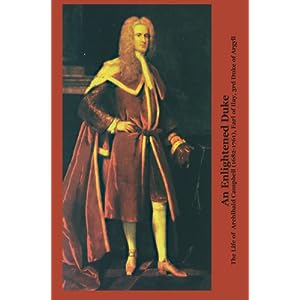