Foundation of the Court of Session: The Court itself considers

It is worth noting that in Hepburn v Royal Alexandra Hospital NHS Trust [2010] CSIH 71 at paragraphs 14 & 15, Lord Hamilton, as Lord President, considered the statutes founding the College of Justice, and cited  the important new book of Mark Godfrey, Civil Justice in Renaissance Scotland: The Origins of a Central Court, Brill, 2009. The Lord President considered the older views of Hannay that the foundation was not really historically significant, juxtaposing them with the more modern view of Godfrey that what happenned was in many ways a new beginning. The Court went on to interpret the Acts of 1532 and 1541 on the Court's powers, raising interesting questions as to how such statutes should be approached in the modern world.

But this indicates the importance of Godfreys' book, and all readers of this Blog are heartily encouraged to read it and recommend it for their libraries: 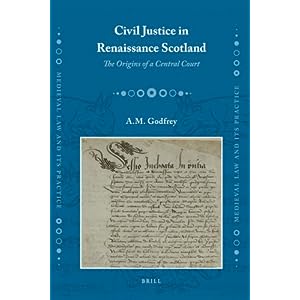