Creation of the Ius Commune: From Casus to Regula

The above book has just been published, edited by John W. Cairns and Paul J du Plessis, and copies should soon be generally available. Dealing with the techniques used by jurists to move from the casuistic style of Roman law to the regulae that underpin modern legal systems, it provides an innovatory approach, and constitutes a major and novel contribution to the literature.

After an introduction by the editors, the chapters are as follows: "The Sources of Medieval Learned Law" by Harry Dondorp and Eltjo Schrage; "The Infrastructure of the Early Ius Commune: The Formation of Regulae, or Its Failure" by Kees Bezemer; "Ius Quaerens Intellectum: The Method of The Medieval Civilians" by James Gordley; "Medieval Family and Marriage Law: From Actions of Status to Legal Doctrine" by Laurent Waelkens; "The Roman Concept of Ownership and the Medieval Doctrine of Dominium Utile" by Thomas Rüfner; "Succession to Fiefs: A Ius Commune Feudorum?" by Magnus Ryan; "Towards the Medieval Law of Hypothec" by Paul J du Plessis; "The Ignorant Seller’s Liability for Latent Defects: One Regula or Various Sets of Rules?" by Jan Hallebeek; "The Glossators’ Monetary Law" by Wolfgang Ernst; "Citations and the Construction of Procedural Law in the Ius Commune" by R H Helmholz; "Doctoribus bona dona danda sunt: Actions to Recover Unpaid Legal Fees" by James A Brundage.

The book is based on the papers delivered at a small, highly successful, expert conference held in the University of Edinburgh on 12-13 December 2008, and organised by the Edinburgh Roman Law Group and the Centre for Legal History. Support was generously given by the School of Law and the Edinburgh Legal Educational Trust, while publication was undertaken in the Edinburgh Studies in Law Series edited by Mrs Elspeth Reid. 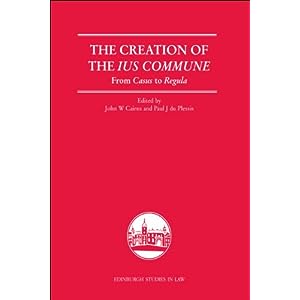